Ragging in any form is banned inside and outside the campus. Strict action is taken against persons flouting this rule; no leniency is shown. Suspension and/or withdrawal from the hostel/ college is the first action against the offender.

Any conduct by a student, whether by words spoken or written or by an act which includes physical abuse, lewd acts, teasing, rough or rude treatment, indulging in rowdy, undisciplined and obscene activities which causes or is likely to cause annoyance, undue hardship, physical or psychological harm or mental trauma or raise apprehension or fear in a fresher / junior student or other students or forcing a student to do any act which such a student is not willing to do and which has the effect of causing or generating a sense of shame or embarrassment or danger to a student's life or adversely affect the physique or psyche of a fresher or a junior student. 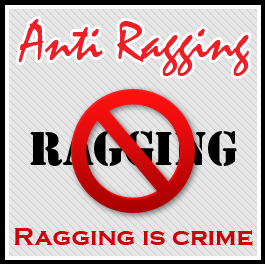 RAGGING IS A CRIME

To establish an effective Anti Ragging System in line with the directives of JUTU-K and AICTE, Vishnu Institute of Technology has taken the following measures:

The Principal, HODs and senior faculty addressed the seniors explaining to them the menace of ragging and the severity of the situation, the directives of the Supreme Court, the AICTE and JNTU and punishment that will be meted to them in case found to be guilty of ragging. They also informed them that the burden of proof lies with the accused and not with the victim.